We have great news! Our Summer Camps will take place as usuall in July and August, 2021. Sign up here and see you soon.

Of course when discussing tourism in the Czech Republic, one cannot overlook the overwhelmingly popular tourist destination of Prague.

The city is generally considered to be one of the most beautiful world capitals with an exquisitely preserved historical center.

In 1992 the historical center of Prague covering an area of 866 hectares was listed in the UNESCO World Cultural and Natural Heritage Register. Prague has always played an important role in the history of the nation, the country and whole Europe. It has cherished the reputation of being one of the most beautiful cities in the world and has been paid tribute by many notable personalities. 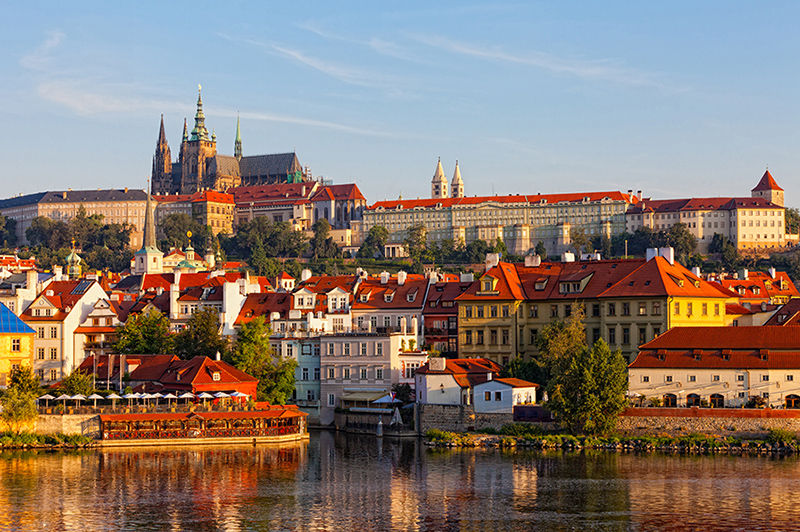 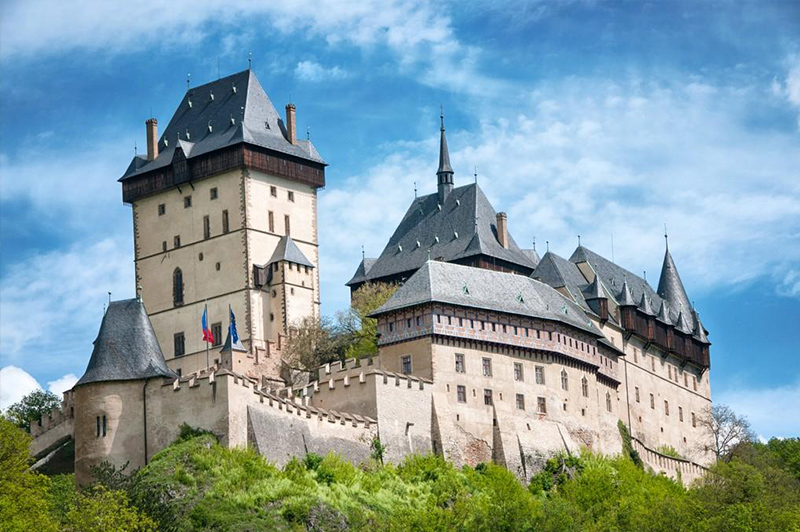 This Gothic castle which dates from the 14th century was founded by Emperor Karel IV. (Charles IV.) as a repository of imperial crown jewels and sacred remains. It was modified in the Renaissance style and re-built in the purism style between the 19th and 20th century. It includes historic interiors of the Emperor's Palace and of the Marianska Tower. It contains also the Well Tower . The St. Cross Chapel is closed.

This originally early Gothic castle was built in the style of "French kastel" and modified in the Renaissance style. Later it was re-built as a baroque chateau. At the end of the 19th century the chateau was renovated in the romantic style for Archduke Frantisek Ferdinand d Este. It includes a rose garden, a large English park, luxurious lounges and chateau collections (such as an armory, a library, a chapel and others), private rooms of F. F. d Este, a picture gallery, the St. Jiris (Georgs) Museum and a shooting gallery. 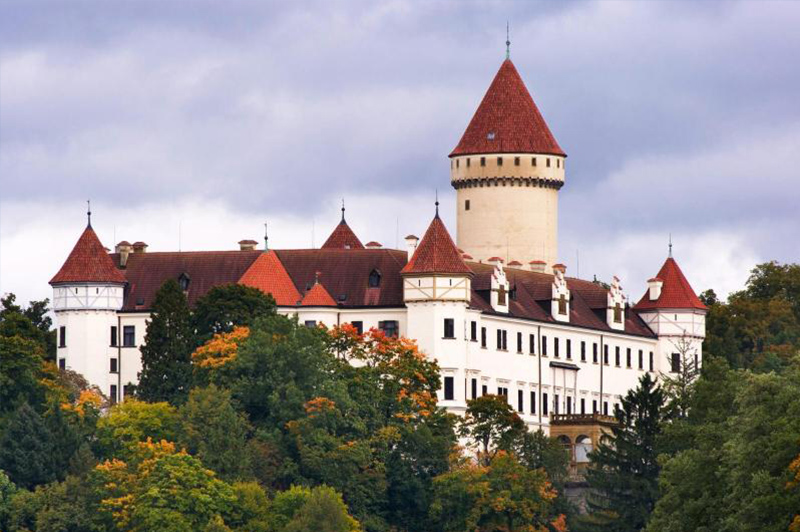 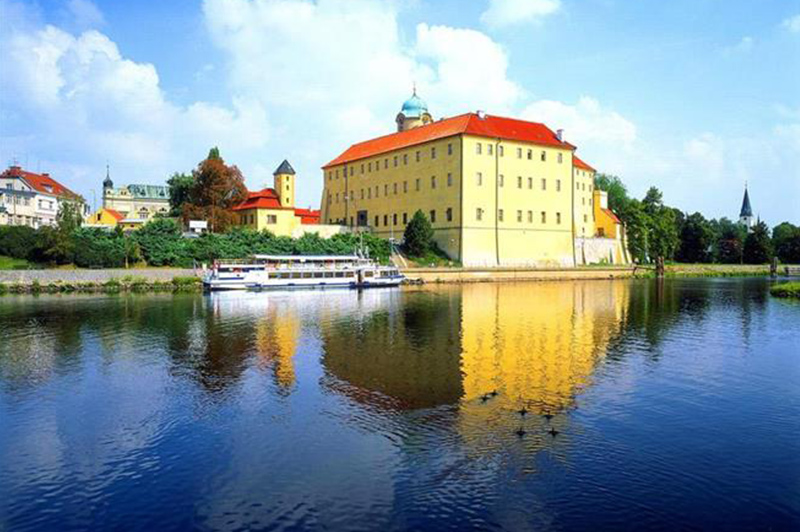 District of Nymburk, located in a beautiful park and forest park area in the lowlands, 188m above sea level with a typical lowland climate. In total, 13 springs rise directly in the spa area. The well-known Podebradka mineral water is tapped and bottled here.

The earnings from the Kutna Hora silver mines ensured the fame of the Czech royalty in the middleages. Kutna Hora became the most significant and wealthiest town in the Czech lands. At the turn of the 14th and 15th centuries the city of silver became the town residence of King Wenceslas IV.

The gothic church of St. Jacob (1330) and the cathedral of St. Barbara, patron saint of miners (1388), are the most important architectural monuments in Kutna Hora. Other adornments of the Kutna Hora treasury include the former mint - the Italian's Courtyard - from the 13th century, and several aristocratic dwellings. In the building known as Hradek, which is part of the former town defenses, there is a mining museum. Part of the exhibition is a tour around a medieval mine. Other monuments deserving of interest are the former Latin school or the cloistered church in Sedlec municipal area where there is a quaint ossuary, also known as the Bone Church. The interior is made entirely of human bones. 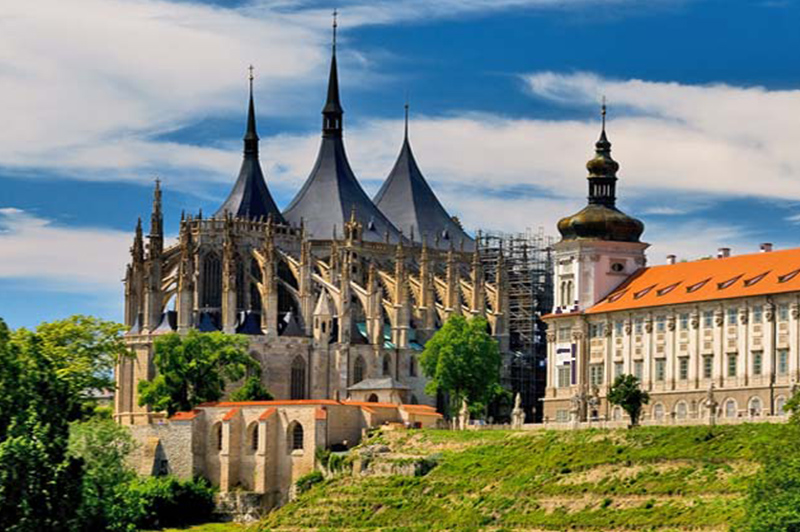 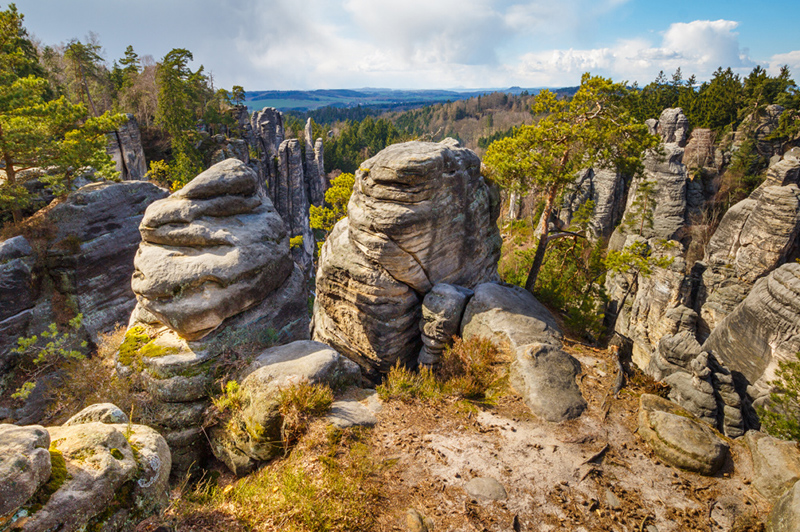 The region of romantic trips and rocky nooks. This is truly the region of Cesky Raj (the Czech Paradise in English). It is one of the most remarkable places in the Czech Republic. These words have been used by Czech spa guests, staying in Sedmihorky, as far back as 1870, to describe the beautiful surrounding scenery, which has been created by the magic of nature and by the people who live and have lived here.

Brief description of the Region

The magnificent Prachovske skaly sandstone rock town, where the writer Vaclav Ctvrtek has set his fables Rumcajs and Manka with their small smart son Cipisek, rises nearly on the door-step of the town of Jicin. Other sandstone formations, such as a plateau with a basalt peak known as "Muzsky" ("Male"), "Drabske svetnicky" (the "Drabske dwelling rooms") and small romantic rock castles are located near the town of Mnichovo Hradiste. A number of castles and chateaux, along with the Hruboskalske Rock Town, which was admired not only by the famous poet K. H. Macha, but also by other artists, extend over the area of Hruba Skala. Painters took a fancy to the Maloskalsko Region, which boasts a number of smaller sandstone towns, bizarre rock formations and castle ruins rising above the valley of the Jizera River.

Are you ready to join us for online hockey training?

We've been working hard on transforming our hockey expertise into extensive online coaching so you can work on mastering your skills even when we are not together. If you are interested in the next level of hockey training, enter your email and we will keep you updated with all the news!